Adding color and glamour to life, one nail at a time.

Nail Polish Sales And The Recession 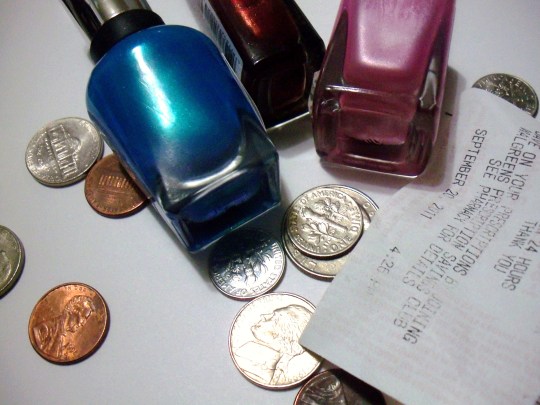 Apparently being broke isn’t stopping folks from buying nail polish. An article posted on Yahoo’s Shine titled Nail Polish is the New Lipstick: High Sales Marks New Recession Indicator,  quotes a study from NPD Group, a market research firm, that states that nail polish sales have gone up 65% since 2008. The study seemingly indicates a correlation between rough economic times and the increase in nail polish sales.

This isn’t the first time that makeup companies have benefited from hard financial periods. Nail polish is seemingly taking over where lipstick left off.  Time magazine  which is also quoted in the article, explains that in 2001 sales of lipstick had increased and continued climbing until 2007, when sales began to decline. The reason given for the high sale of lipstick then is the same for nail polish’s popularity now.

Like the author in the Shine article stated, perhaps nail polish is the trend now because some people aren’t able to afford repeated trips to the nail salon.  Maybe people have bought all the lipstick they want, and now it’s on to nail polish. I know I go through spurts of mini splurges. For a couple of years it was earrings, then body sprays, eyeshadow, lotions, now nail polish.

So it’s all very plausible to me. People still want to look and feel pretty regardless of their economic standing. Taking a few dollars and going to buy nail polish is something you can do for yourself and not feel guilty. I believe that when money is tight, you need an inexpensive, personal treat to perk yourself up whether it’s nail polish, lipstick, candy, or whatever. It’ll be interesting to see in the (hopefully distant future) what will be booming during another economic downturn.

What are your thoughts?