Adding color and glamour to life, one nail at a time.

Why Won’t Hangnails Let Me Be Great?! 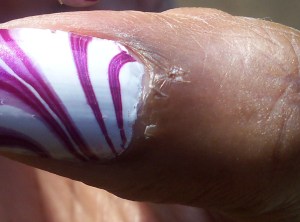 They’re ugly, they’re nasty, and they’re foul. I’ve got a hangnail on my thumb, and it’s not pretty. It’s sore and annoying, and I want it to magically disappear just as magically as it appeared. This unsightly looking piece of dried skin jutting from my thumbnail is just horrific.  It’s not like this is the first hangnail that I’ve had, it’s just the first one that I’ve had in a long time. It’s ruining my nail look! Why is it here?! Why won’t it go away?! Why won’t it let me be great?!

Out of frustration and  agony, I started searching online to learn more about this cumbersome thing. You gotta learn to crawl before you learn to walk, and I had to figure out exactly why they show up before I could get to the point of figuring out how to get rid of such things in a timely manner. Timely manner meaning right now.

“Those annoying little triangular splits of skinaround the fingernails are nothing more than dead skin. The skin in that area, which does not contain a good supply of oil to begin with, simply dries out.”

I wasn’t aware of that, but that certainly explains a lot. The article on mothernature.com continues:

Who gets them? They’re particularly common among women who have their hands in water a lot or who bite their nails. But, says Rodney Basler, M.D., an assistant professor of internal medicine at the University of Nebraska College of Medicine, anyone involved in an occupation that dries out the hands is at risk. “The worst cases of hangnails [as well as chapped hands and hand eczema] occur in letter sorters. People who work with paper all the time get terribly dry hands because the paper actually absorbs oil from their hands. Often they think they’re allergic to ink on the paper, but it’s just the physical effect of oil being removed from their skin.”

I do wash dishes by hand at least three times a day, and I do wash my hands a lot.  Over the past week I have constantly used nail polish remover at least 50 times practicing over and over again water marbling, so I believe that may have contributed to my problem.

So what can I do now that I have the hangnails? Two recommended tips seemed appropriate for me:

Get a clip job. “If you get a hangnail, clip it short and clip it early,” advises Joseph Bark, M.D., a Lexington, Kentucky, dermatologist. “That’ll keep it from getting worse. Don’t do major surgery on yourself; just clip off the little tags of skin with small, sharp, sterilized scissors.”

Go soak. “Soaking in an oil-and-water solution, as you would when getting a manicure, is very helpful,” advises Dr. Basler. “I tell my patients to mix 4 capfuls of bath oil such as Alpha-Keri with 1 pint of warm water and to soak their fingertips in it for maybe 10 to 15 minutes.”

It seems that the likely conclusion to preventing hangnails in the first place is to keep the area around the fingernails moisturized. The article confirms that:

Make moisturizing a habit. To prevent hangnails in the first place, “moisturize your cuticles every day. Make it a habit, not something you do just when you get a manicure,” says Dr. Bihova. “Rub hand lotion into the flesh surrounding your nails to keep the area soft. For a more soothing feeling, warm the moisturizer over a pan of warm water, using a double boiler. Every time you apply moisturizer to your hands, take extra time to rub some into the cuticles.”

I’ve learned my lesson and I will make a habit of keeping the area around my nails moisturized throughout the day. I’m gonna be oiling and lotioning my hands up like crazy, cause hangnails are not the business. How do you deal with your hangnails?